Hi Ladies, Melinda here, like most women out there I to have had a on and off again love hate relationship with my body and weight. From originally wanting to lose my teenage weight, trying to get back to my pre pregnancy weight after my last child and hitting 40 and beyond my weight has always been a struggle. When i hit 40, I wondered why the scales are slowly going up, if I’m still exercising and eating healthy like I did in my 30’s. I thought I would share with you a little about myself and my first journey to lose weight and a few hurdles I had to overcome.

All through my school years I was chubby, plump or slightly overweight, by the time I was in my early twenties I was overweight (size 16 +), exercise was non-existent and I ate very badly. That all changed one day when I woke up and made the decision that would change my life and subsequently my husband’s. I decided that I was sick of being the size I was and I wanted to lose some weight. I ultimately decided that I would be happy if I could get down to a size 12.

What did I do? I started with one thing at a time. First, my diet – I stopped using butters & marges, fatty spreads, high fat cheeses, no more dressings and swapped the milk to low fat. I became what my husband calls me “a picky eater”. If we ate out it was like “20 questions” because I would and I admit I still do interrogate the waiters as to what is exactly in the dishes.

Next came the exercise, my sister had just started going to aerobic classes down at the local gym, so I tagged along with her a couple of times per week. That was the start and 3-4 months later I had lost my first 10 kilos and was hooked on Group exercise classes. However, I had reached my first obstacle. I had reached a plateau. And my body had adapted to the changes. I had lost a decent amount of weight, felt fitter, stronger and faster but I couldn’t seem to lose any more on the scales. I realised I had to change something up to shock the body even more.

I decided to make a few more changes to my diet, what I was eating and how often. I started to eat 5-6 times a day, increased my fibre intake, limited the amount of fat and drank plenty of water. I also increased the amount and intensity of the exercise I was doing. I started doing 4-5 sessions per week which now included a Pump class and I started running. I also talked to a Fitness Instructor and got a programme for the gym which was a combination of weights & cardio. However, I have to admit, I spent more time attending the Group fitness classes than doing my programme. I struggled to find the motivation to exercise by myself in the gym and personal trainers were non-existent.

How does lifting weights help you lose weight? Resistance training not only tones your body (stops those bits from wobbling), it also increases your Basal metabolic rate (BMR) – How many calories you burn at rest. This means you burn more calories even when you are not exercising. The scales might not have gone down as much as I would have liked – they even went up occasionally, but I was still getting slimmer as my body shape was changing. I noticed I wasn’t jiggling as much and as a side effect I was reducing my chances of getting osteoporosis. Ladies are often worried that lifting weights will make you big and muscular. Don’t worry! It’s just not in our genes for this to happen without hormone enhancement. After 8 months I had reached my goal and surpassed it! I was now fitting into size 8/10 clothes. YES! I had done it.

In total I lost approximately 25kgs. I was not only looking great but I had lots more energy, sleeping better, my skin was looking healthier and I was feeling great too.  I was now hooked on exercise and love the way it made me feel. I often get asked if it was hard. Yes, but it was so worth it. I had days with low motivation and didn’t feel like doing any exercise. I had to constantly remind myself that I always felt better after that class, run or gym session. I had set myself a goal and I wasn’t going to reach it, by doing nothing. Once I got past being self-conscious and how I looked like while exercising, it got easier and in no time I was addicted. Was this a good thing? Yes and no. Positively, I was at the lightest weight (55kgs) I had ever been in my adult years. I liked the way I looked and was wearing clothes I would have never even considered wearing before my weight loss. However, it became a negative thing for myself as I was doing too much exercise. I was working out 7 days a week, without a recovery or rest day and doing very long sessions of 1.5-2 hours most days. On top of this, I was eating a very low fat, low carb diet.  I had what I called constant “fuzzy brain”. My head just didn’t feel right and I hadn’t had a period for over 18 months. I soon learnt through my doctor, that this was a condition called amenorrhea. I was eventually referred to a fertility clinic for it and after all sorts of tests it was put down to significant exercising and extreme weight loss, which had caused (FHA) Functional hypothalamic amenorrhea. I had taken exercising and dieting too far. My body looked healthy on the outside but my weight and body fat was just too low for my hormones to function correctly. I was advised to cut down on the amount of cardio exercise I was doing and get my weight up to around 58kg. I have to say, that was a very hard thing to hear. After all the hard work I had done to get to where I was, to then be told that I had to put weight back on was a shock, but the “fuzzy brain” and amenorrhea was my body’s way of telling me that things weren’t ok. I did what was recommended and got my body back to being healthy functioning again. This became more important to me than how small the number on the scales read.

Sixteen years, three children and a career change later, I still work out 5-6 days a week but for only 30 – 60 minutes at a time. I instruct several classes per week and lift weights, which are much heavier than when I first started. I still prefer to eat a lower carb diet but instead of low fat, I now incorporate healthy fats. 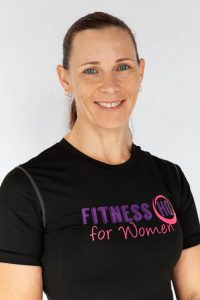